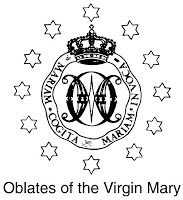 Oblates of the Virgin Mary (OMV)


“Even if I should fall a thousand times a day, a thousand times I will get up again and say Nunc Cœpi–Now I begin.” These words of the founder, Venerable Pio Bruno Lanteri (1759-1830), capture the spirit and mission of the Oblates of the Virgin Mary. Father Lanteri lived in northern Italy in a time of great moral confusion and spiritual discouragement. He formed the Oblates to be both contemplatives and apostles, men of study, prayer, and compassionate pastors. Today, serving in nine countries around the world, the Oblates bring hope for a new beginning. This hope springs from five key attributes essential to Oblate Spirituality: Mercy, Mary, Fidelity, Discernment, and Zeal for souls in today’s world. 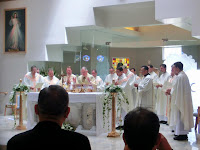 I. Go out to the whole world; proclaim the Good News to all creation (Mk 16:15). With this command, Jesus, the Eternal Word, commissioned His followers to be missionaries of the Way, the Truth and the Life (Jn 14:6). This commission extends to the whole Church … and the work of evangelization is a basic duty of the People of God (Ad Gentes, 35). Of prime importance, though not preeminent or exclusive, this commission is entrusted to Religious as being the most effective means for evangelization (Evangelii Nutuandi, 63). Pope Paul VI comments further that Religious embody the Church in her desire to give herself completely to the radical demand of the Beatitudes. By their lives they are a sign of total availability to God, the Church and the brethren.

II. The [Franciscan] Missionaries of the Eternal Word, by the grace of God and with the assistance of the Blessed Virgin Mary and St. Francis of Assisi, will generously respond to our Lord’s command. The Community will primarily fulfill this mission by evangelizing Catholics who have left the Church. Pope Paul again comments: Today there is a very large number of baptized persons who … have not formally renounced their Baptism but who are entirely indifferent to it and not living in accord with it(Evangelii Nutuandi, 56). [Franciscan] Missionaries of the Eternal Word will strive to defend and explain the beauty and truth of the Catholic Faith to those who have left the “harbor of Truth” for whatever reason

III. Such a mission requires support or pillars. Our two pillars are the Eucharist and devotion to the Blessed Virgin Mary, under the mantle of the Magisterium of the Church. From the Eucharist we will draw from the fountain our strength, perseverance and inspiration. We will lead others back to Jesus, present in the Most Blessed Sacrament, for He alone can lead us to the Father. Our Blessed Lady, Mother of the Eternal Word, is the surest and safest means to Jesus. She is the cause of our salvation. She, who brought the Truth into our world, longs to do so again into the hearts of men, especially in those who have wandered from the pillar and bulwark of the Truth (1 Tim 3:15). With these pillars and the continual assistance of St. Francis, we pray that we will bring countless souls back to Jesus, our Lord and God!

Invited to regroup in California by Cardinal McIntyre in 1957, the priests started teaching high school in Santa Ana and helping in local Orange County parishes on Sundays. In December of 1958, Cardinal McIntyre gave his consent to erect a permanent monastic community and novitiate.

The priests were aware that they alone were free to carry on the religious and educational heritage of the mother abbey in Hungary. Using their savings, they purchased some property and opened St. Michael’s Junior Seminary and Novitiate in September of 1961.

When the school opened its doors, many young men entered the novitiate, and what would eventually become the Abbey community was begun. St. Michael’s formation community was greatly affected by the cultural upheavals both inside and outside of the Church in the 1960’s. Many young men entered the community, but few persevered. On the feast of St. Michael the Archangel in 1968, the Founding Fathers decided to take a public stand of loyalty to the Holy See and the Church’s tradition.

The priests realized that loyalty to the Church and the See of Peter would be the  ommunity’s salvation. This attitude embraced both old and new in the Church. Their policy became “not to reject what is good in the old, and to take what is good in the new.” They invited young men of like mind to enter the community to seek an authentic religious and priestly life. This stance has continued to bring in many new vocations.

In 1976, St. Michael’s became fully autonomous as an independent priory of the Order. In 1984, Rome approved the elevation of the community to abbatial status. At that time Fr. Ladislas K. Parker (1915-2010) was blessed as first Abbot of St. Michael’s Abbey. The community has continued to grow rapidly ever since. The abbey began with seven members in 1961, and now the community has 50 solemnly professed members and 21 seminarians.

In 1995, the community elected Eugene J. Hayes as its second abbot. In 1996, the abbey established a foundation for cloistered, contemplative women in Tehachapi in the diocese of Fresno. The priests of the abbey provide daily pastoral care for the sisters in Tehachapi, and run two parishes in Southern California. Education remains the primary apostolate of the abbey.

Marians of the Immaculate Conception (MIC)
Mother of Mercy Provence

The Marians are a Congregation of more than 500 priests and brothers in 19 countries around the world. 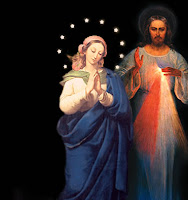 -Spread devotion to Mary as the Immaculate Conception.

-Offer our lives for the Holy Souls in Purgatory, especially the victims of war and disease.

-Operate publishing apostolates and assist where the need is greatest in parishes, shrines, schools and missions.

Posted by Joseph Esparza at 4:57 PM

June has the Feasts of The Hearts of Jesus and Mary 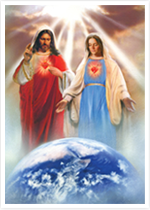